From History of Owensboro
Jump to navigation Jump to search 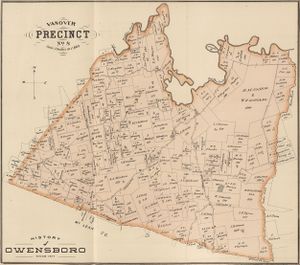 Map of Vanover Precinct in 1876

This precinct lies directly south of the Lower Town precinct and is separated from it by Panther Creek. The western and southeastern portion contains a vast amount of coal.

The first settlers of Vanover Precinct were the Crabtrees. There were four brothers—Moses, Abraham, Isaac and Jacob. Moses was the oldest of the family, and was a young married man, the others being in their teens. They all came at the same time, and were from Virginia, but the exact date of their settlement is not certainly known. The Potts family came in an early day; also, Thomas Minton, Andrew Kelly, one Mr. Jones and Abner Lea, all of whom, including the Crabtrees, settled in the western part of the precinct. Moses Crabtree became the father of sixteen children.

This part of the County was for a long while thinly-settled, and it is only after the 1860's that it has begun to be improved to any great extent. Part of the precinct is hilly and broken, but the hills are covered with good soil, and well adapted to farming. Narrows Bridge(Moseleyville) on Panther Creek, twelve miles from Owensboro, is the only post-office. The precinct was named after the numerous families of Vanovers who settled there around 1860, coming to the County from East Tennessee.

There are no villages in this precinct. About 1868, F. M. Austin sold whisky and groceries in the southwest corner, and Joseph P. Waltrip was requested to give a name to the locality. As the whisky that was sold was of a very bad quality, Mr. W. gave it the name of Blue Ruin. Some time later, J. M. Buker commenced building a house at this point in which to put dry goods, but for the want of capital he failed to complete it, whereupon Mr. Waltrip changed the name to Needmore. There are four families, one small grocery, kept by J. W. Cravens, and one grist-mill. The burg is situated two and a half miles east of Possum Trot, in Curdsville, and four miles south of West Louisville. Mr. Waltrip died in McLean County in 1880.

Towns in this Precinct

Businesses in this Precinct